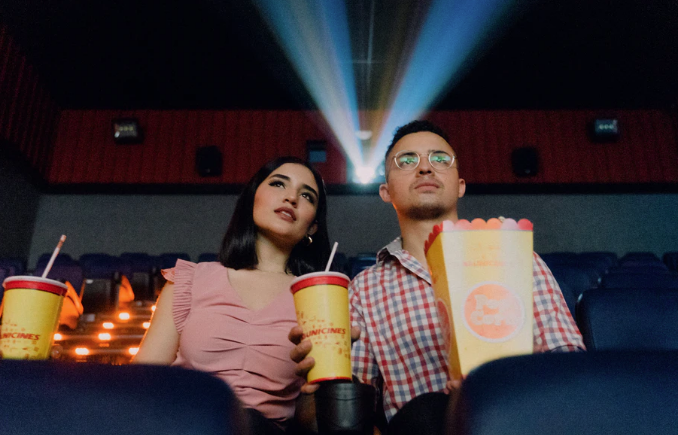 As McKinsey explains in a recent study, “what got us here, won’t get us there.”

Distribution strategies and channels that CPG brands have relied on for decades just don’t work the way they used to — times have changed. And brands that stay rooted in the past are going to have a hard time moving forward.

Here’s a list of four product distribution channels that are losing their luster.

Everyone knows movie theaters got absolutely clobbered by the pandemic. So much so that theatrical revenue dropped from $42 billion in 2019 to $12 billion in 2020. (We’ll share how this affects CPG brands in a bit.)

What you may not realize is that movie theaters were struggling before COVID. And whether the blame lies with the rise of streaming services or with the movies themselves, the wheels of change are in motion.

In fact, Hollywood has been striking deals with the major cinemas recently, reducing long-time industry standards like the 75-day exclusive theatrical window (which prevents streaming or DVD rentals during that time period).

While all of this obviously isn’t good for theaters, it’s equally troubling for CPG brands that relied on movie theaters as a distribution channel. Half of Coca-Cola’s sales, for example, come from venues like movie theaters. And not surprisingly, Coke’s revenue plunged 28% in the second quarter of 2020.

So it’s time for brands that have relied on movie theater sales in the past to recognize the changes to the channel and start looking for alternatives. People are still watching movies, they’re just watching more of them from home. And they still want all the snacks and sodas and popcorn to go with their summer blockbuster.

The convenience channel is a good candidate for filling the void since people can run up to a local store to grab a few quick snacks. 7-Eleven even creates custom snack mixes in partnership with CPG brands specifically for movie nights at home.

There’s a “Get a Room” mix for rom-coms featuring sweet and salty popcorn, peanut butter-filled pretzels, and M&M’s. Then there’s a “Parting is Such Sweet Sorrow” mix for dramas filled with gummy bears, Ben & Jerry’s Cookie Dough Chunk, and Skittles. 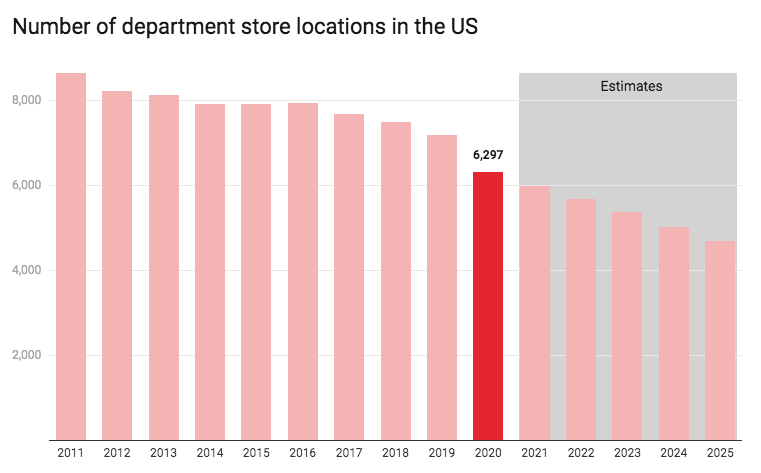 Once giants of American retail, these iconic department store brands have all declared bankruptcy in recent years.

And while the pandemic certainly didn’t help matters, department stores have been struggling for years — facing competition from e-commerce and discount stores coupled with declines in the middle class, the mall itself, and the need to dress up for work.

In 2021, even those that are hanging on are shuttering retail stores in an effort to stay afloat. And the stores that remain open are shifting to smaller footprints as fewer people go to stores and more people shop online. Instead of a place to buy things, the remaining retail stores are essentially functioning as showrooms with fewer salespeople.

“They show you the sexiest goods to stimulate demand and start you thinking, knowing you’re going to pull out your phone and shop there,” Victor Calanog, head of commercial real estate economics at Moody’s, told Recode about the transition to showroom-style stores.

But where are people shopping instead for clothes and makeup, the stalwarts of American department stores? MarketWatch reports that Amazon is now the top clothing retailer in the US, followed by Walmart, TJ Maxx, Macy’s, Target, Kohls, and Gap.

And as for makeup, consumers have been shifting steadily towards speciality stores like Sephora and Ulta Beauty. Ulta Beauty, for example, opened their second New York location at Herald Square in March 2021 — a signal that their growth could be in physical locations. 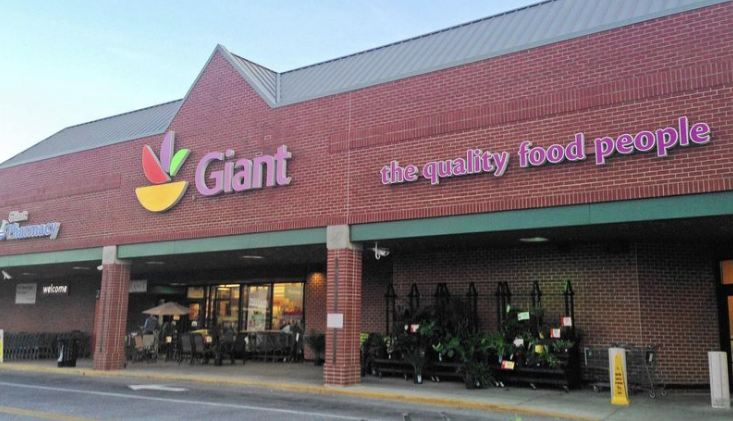 Over the past two decades, traditional grocery has faced an onslaught of competitive forces driving consumers into different channels. First, it was the rise in popularity of big box stores like Costco and Super Walmart. Then the rise of quick-service restaurants and c-stores as millenials came of age and cooked fewer meals at home.

Last came e-commerce, a slow trickle at first until the pandemic came through and kicked it into high gear. Of course, grocery did well during the pandemic itself, with restaurants closed and people stuck at home. But that will soon fade. And in its wake will be a vastly changed landscape.

These changes affect not only traditional grocery, of course, but also big CPG brands — tied inextricably to the channel after years of mutually beneficial techniques like promotional pricing, control of shelf assortment, category planograms, and slotting fees.

But as John Grubb so aptly describes in SuperMarket News, “Decades of mutual back-scratching effectively built a competitive moat, but that moat has been breached.”

A few big names have made the leap into DTC already, with M&M’s taking the crown for best-in-class DTC website among consumer packaged goods brands.

According to an analysis of 29 companies, M&M's was the clear standout thanks to a marketing mix of engaging content, product personalization, and a clear loyalty program sign-up feature.

Plus, marketers of the ever-popular candy brand drive interest to the DTC site using social media and other marketing channels to hook consumers with new product launches and quirky recipe ideas. 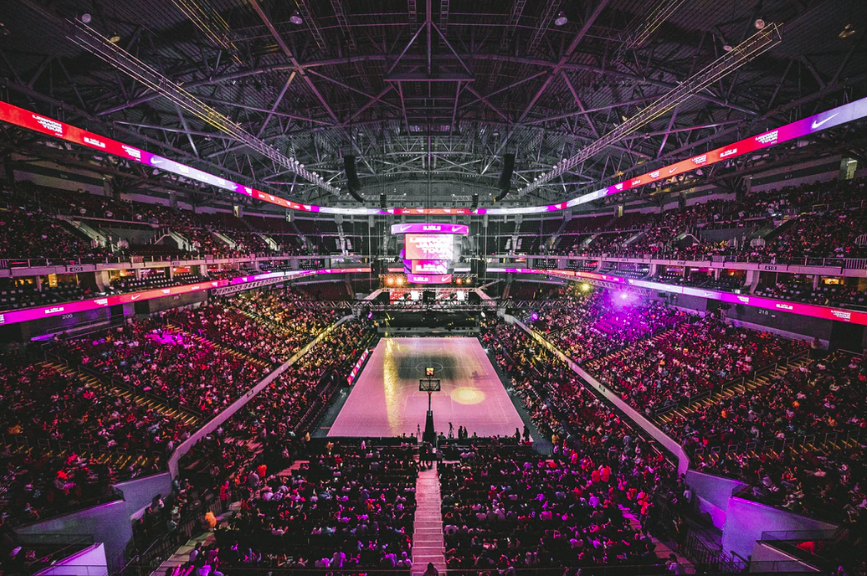 Despite months of hope and optimism, Olympic organizers announced in early July that they would bar spectators from most events at the 2021 Games. The decision followed a sudden spike in coronavirus cases leading to Tokyo declaring a new state of emergency.

Such has been the state of affairs for live sporting events and concerts since the onslaught of the pandemic. But like nearly every other channel, the writing was already on the wall.

Back in 2018, New York Magazine ran a piece titled, “Nobody’s Going to Sports in Person Anymore. And No One Seems To Care.” In it, they highlighted the fact that 2018 was the sixth consecutive season with declining attendance, dropping a shocking 10% from the same time period the year before.

And Sports Illustrated reported in 2020 that college football is suffering the same fate. While the 2019 season saw an uptick of about 2,000 fans per game — for an average of 84,684 in a 91,916-capacity stadium — attendance has still fallen nearly 6% over the past five years.

More concerning for CPG brands than the decline in attendance is, as Will Leich argues in the New York Magazine, that no one seems to care.

According to Leich, “The main reason attendance is down in Major League Baseball as well as most of the other major professional sports (...) is because it can be. Teams don’t really care anymore about bringing fans to the stadium — at least not as much as they used to — because they no longer need people in the seats to make money.”

But CPG brands do need people in the seats to make money. And they’ve spent heavily on sponsorships and exclusive distribution packages at major venues in order to do that. Heading into 2020, for example, Coca-Cola had secured rights to pour at 15 NFL stadiums, Pepsi 13, and Dr Pepper 4, according to SBJ research.

Unfortunately, it appears time to reconsider the value of these investments. CPG brands would be wise to consider shifting some resources to other channels to capture the growing customer base watching the big game at home.

As with the movies, convenience stores have great potential here to be the right distribution channel. Fans can run up to the store quickly to grab everything from beer to soda to snacks — and at a much lower price point compared to the ballpark.

GasBuddy emphasized this last point in an episode of “He Bought/She Bought,” giving two college grads $10 to buy snacks from 7-Eleven for the big game. Both ended up with an armful of goodies, including CPG game-day staples like Tostitos chips and dip, Doritos, Gatorade, Reeses cups, and Utz potato chips.

At the end of the day, CPG brands need to be where the customers are. And they’re not where they used to be. The middlemen of yesterday — grocery stores, movie theaters, department stores, and live sporting events — aren’t reaching the end-user like they did before.

But with so many types of distribution channels out there, it’s important to remember that no single channel will be the end all solution. Instead, business models that incorporate a variety of distribution methods to sell products in large quantities will most likely prevail.

Marketing a CPG brand? See how helps brands like yours increase revenue 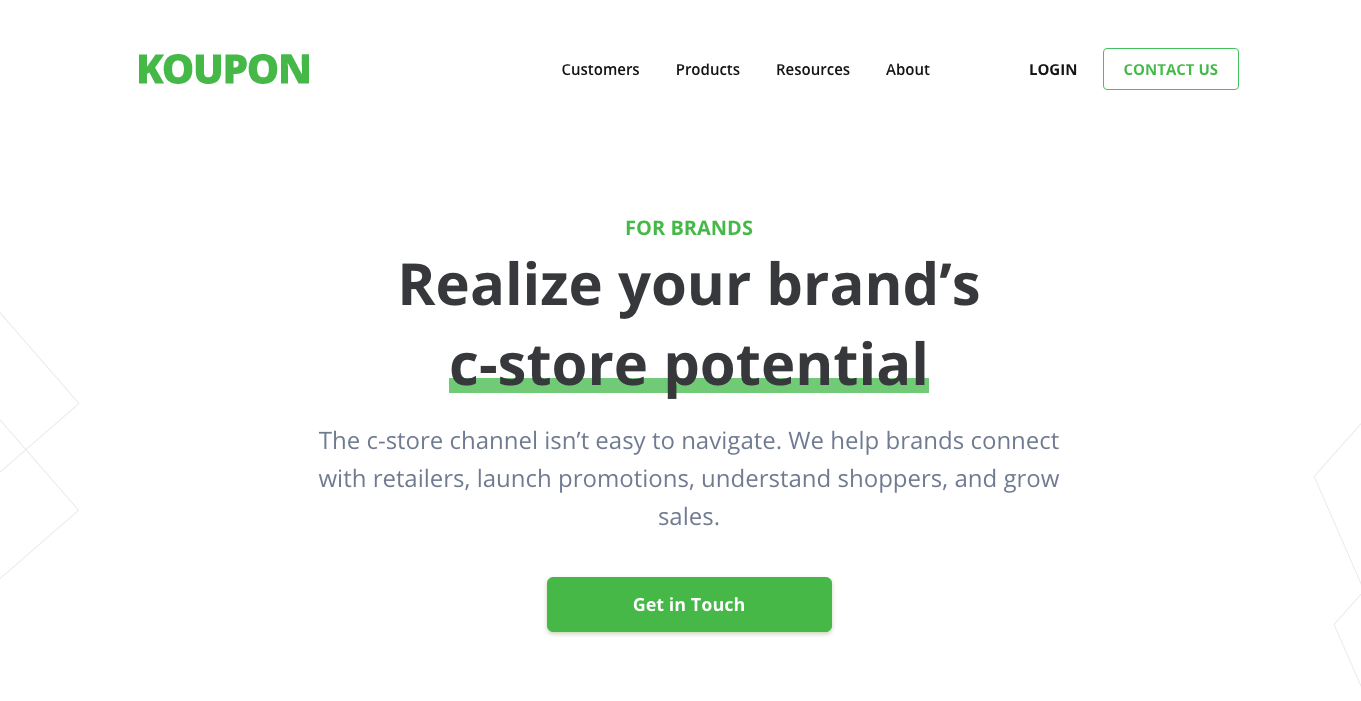 Powered by nearly 5 billion consumer transactions, Koupon provides brands in the CPG industry with unique insights that help measure and increase your revenue in the c-store channel.

Here’s how Koupon gets results for CPG brands in c-stores:

The bottom line? We connect brands and retailers, helping everyone reach more customers and drive sales. Get in touch with our sales team to learn more!