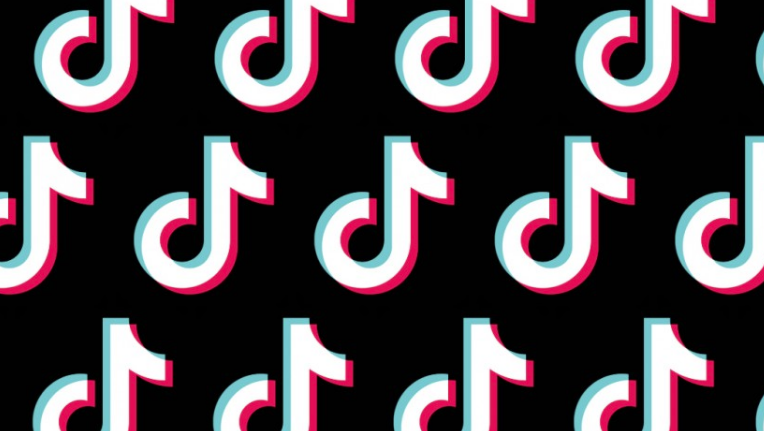 62% of TikTok’s 100 million users are between 10 and 29 years old, making it the platform of choice for Generation Z.

But it’s still a bit of an enigma to the rest of us. Case in point: this top ranked video of a c-section performed on a banana.

If you’re in the CPG industry though, it’s high time you figure it out — or risk being left behind.

Gen Z’s spending power is over $143 billion in the U.S. alone. And 50% of Gen Zers are heavy c-store shoppers, a high growth channel for many CPG brands.

Before you go rushing in though, it’s important to grasp the nuances of TikTok compared to other platforms. Brands that get it are faring much better than those that don’t. TikTok’s own advice, “Don’t make ads, make TikToks,” should be your starting point if you’re looking to really crush it on the platform. 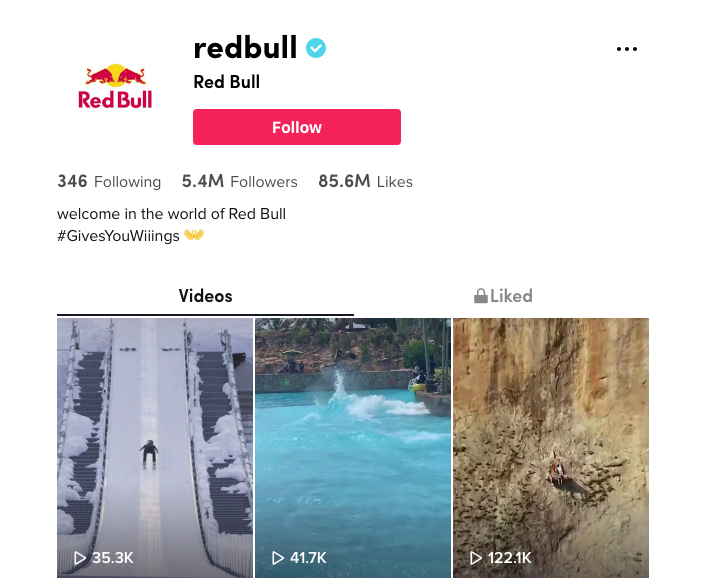 It’s not too surprising to find Red Bull at the top of this list. After all, they were making videos of people doing extreme stunts before TikTok was even a thing.

And now that TikTok is a thing, Red Bull is crushing it. Their action-packed videos with the #givesyouwiiings hashtag have been viewed over 417 million times. And they’ve amassed 5.4 million followers, putting them among the most followed branded accounts on the platform.

Also, Red Bull’s videos are clearly NOT ads. They’re just videos of people doing stuff, albeit crazy stuff, which resonates with their customer base. 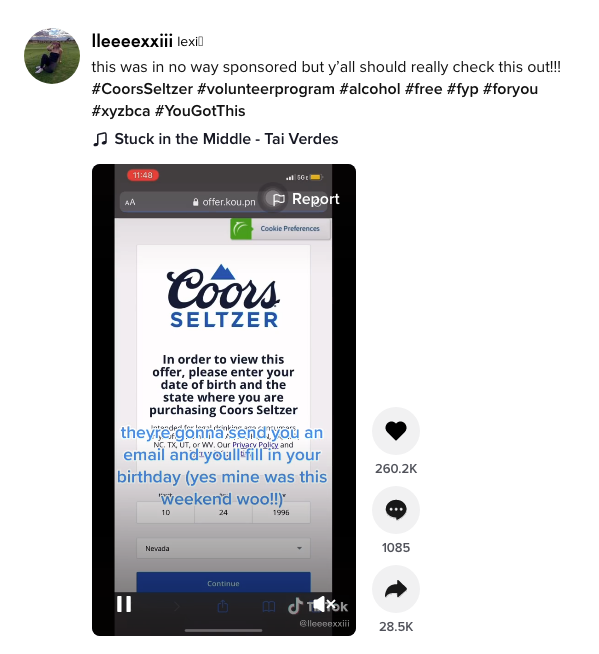 One of the interesting things about TikTok is that brands can get a lot of attention without always being active on the platform.

As long as you’re running a campaign that appeals to younger people, entertains them or adds value to them, chances are they just might take your campaign to the platform and give you free adverts. This was the case with Coors Seltzer and the rollout of their volunteer program.

Dubbed the “easiest volunteer program in the world”, all you need to do to participate is drink Coors Seltzer. For every 12-pack purchased, Coors will restore 500 gallons of river water through a partnership with Change The Course.

Plus, Coors will pay for your first 12-pack using Koupon’s rebate tool. This opportunity to score a free 12-pack caught the attention of a TikTok user, who then made a video showing others how to do the same.

The video went viral, amassing over 260,000 likes and 28,500 shares. Other users have also tagged Coors using #Coorsseltzer, accumulating over 2.5 million views for the hashtag.

User-generated content (UGC) is central to any brand’s success on TikTok. It drives engagement, creates authenticity, and builds trust.

Monitoring UGC that mentions or tags your brand should be a priority on the platform, even if you’re not active yet. It can provide valuable insight as to what’s resonating with your customers.

Once you’re active, you can use these mentions to interact with customers and identify influencers, big and small. 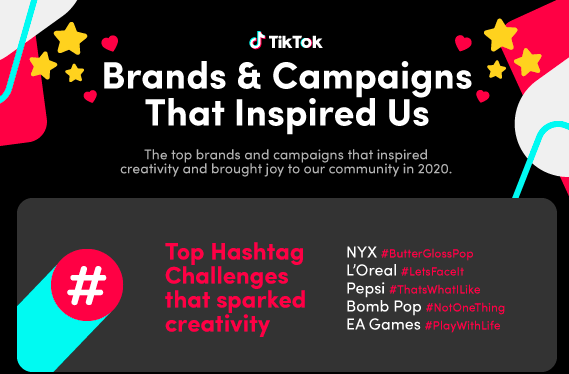 In December 2020, TikTok released a list of its top-performing brand campaigns, selected based on metrics including views, likes, engagement, and follower growth.

Katie Puris, TikTok’s Managing Director of Global Business Marketing, said, “These campaigns brought much-needed joy and levity to TikTok and into our homes during a challenging year and truly exemplified the power of authenticity in marketing."

As you can see above, Pepsi was included in the category, “Top Hashtag Challenges that sparked creativity.”

According to TikTok, Pepsi’s #ThatsWhatILike hashtag encouraged people to do what they enjoy most, even in the face of others' judgement – whether it's singing in the car, wearing a crazy costume, or just enjoying a Pepsi.

Hashtag challenges or campaigns are one of the most popular approaches for brands on TikTok, likely due to their chances of going viral.

According to Hootsuite, 35% of TikTok users have participated in one. And 16% of all videos on the platform are linked to hashtag challenges.

If you’re unfamiliar, a hashtag challenge encourages your audience to create content that aligns with your brand. On TikTok, users are often encouraged to make videos using a specific song or dance moves. So you just have to find a way to align what they want to do with your campaign goals. 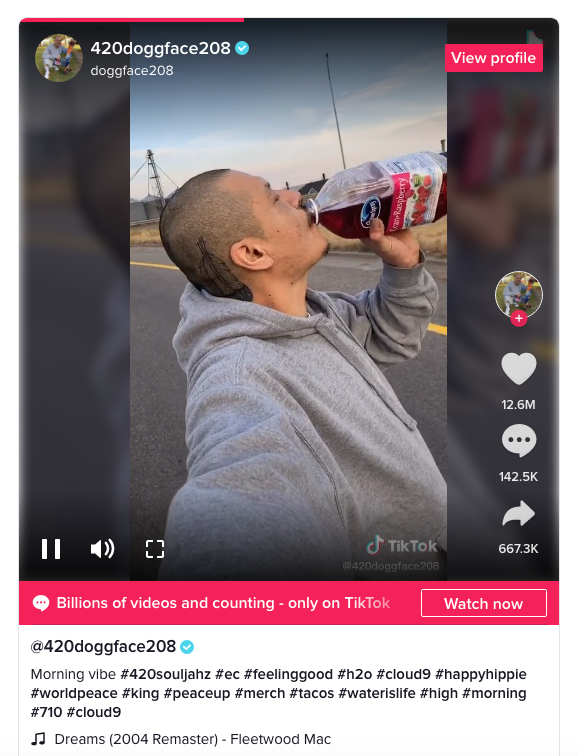 As with Coors Seltzer, the credit for Ocean Spray’s fame on TikTok goes to user-generated content. Specifically, that of Nathan Apodaca, a 37-year-old potato-farm worker in Idaho.

Apodaca was skateboarding to work one day while drinking Ocean Spray and lip synching to Fleetwood Mac. He uploaded a video of his “mega chill” ride on TikTok and it immediately went viral, amassing 100,000 views in its first hour and 35 million to date.

Celebrities from Jimmy Fallon to Mick Fleetwood himself got in on the action, recreating the viral video with rides of their own.

TikTok works quite similarly to other social media channels in terms of viral posts. Its algorithms are designed to promote “discoverability” for content that’s performing more than others. But TikTok takes it up a level. Where other platforms might show a top-performing post to 20,000 people, TikTok probably shows it to 200,000.

So, users don't always need a large following to go viral with a video. This means it’s not too late for brands to join the platform. Even if you have humble beginnings with small amounts of followers, it doesn’t mean you don’t have the potential to go viral.

Ocean Spray’s experience also points to the delicate balancing act of responding appropriately to brand mentions. If you swoop in too fast or without authenticity, it feels like you’re cashing in on someone else’s moment. But if you wait too long, it gets weird. So balance is key when responding to mentions.

Many feel that Ocean Spray handled this well, giving it time to unfold organically before joining the conversation. And they did so by showing up a week after the video was posted with a brand-new cranberry colored truck for Apodaca, filled to the brim with their juice. 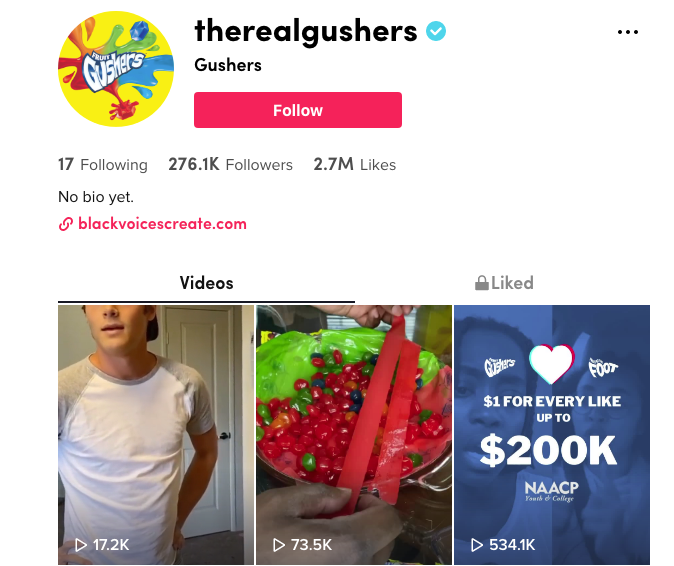 Gushers, like Red Bull, has figured out how to create content that resonates with its customer base. But instead of extreme stunts, their videos lean into quirky TikTok culture, often centering around memes or trends.

In their entry for the upcoming Shorty Awards, Gushers explains that, “Today’s media-savvy teens are great at sniffing out and skipping ads. So when we were challenged to launch Gushers on TikTok, we knew we had to think like Gen Z.”

“It was crucial that everything we did felt organic, so we created our work in the same way that teens create their videos on TikTok. That meant footage shot on iPhones, edited with readily available tools.”

This has resulted in high, consistent engagement, averaging 120,000 likes per post despite having just 276,000 followers. And while the brand has only 20 posts on the platform, they’ve tallied up 2.7 million likes.

And according to these teens, it’s working:

“Is this a real ad? They’re starting to understand our humor.” – mincedpps

“Wait but it’s actually so good like THIS IS HOW ADS ARE MADE.” – jordanrenae451

“this is the only ad I’ll watch on here” – imjustanintern 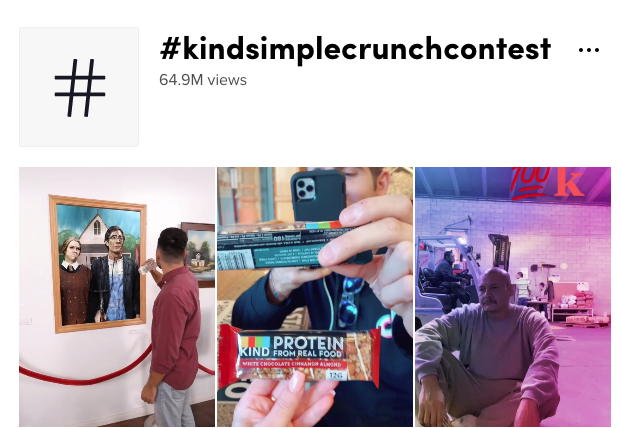 Users were encouraged to post videos of themselves and the sound of Kind’s “most crunchiest bar yet.” Kind awarded a free trip to New York along with a year's supply of Simple Crunch Bars to the TikTok user whose video was played the most.

Being new to the platform, Kind partnered with a few high-profile influencers to get the ball rolling — Zach King, Rachel Ryle, Kombucha Girl and Oven Mom. And boy, did they get it rolling. Within the first 24 hours, Kind tallied up over 18 million views.

If you need immediate results for a specific campaign, big influencers can get you there. Zach King’s video alone received 6.7 million likes, which makes sense considering he has nearly 58 million followers.

But views don't always directly translate into followers. The #kindsimplecruchcontest hashtag, for example, amassed 64.9 million views. But Kind Snacks itself still only has 12,000 followers and 18,000 likes.

So using big influencers is a good way to gain traction for a specific campaign but it’s not enough to build a following.

Named #1 Marketer of the Year by Ad Age in 2020, TikTok’s prowess can no longer be ignored by CPG brands. No matter your age, the time has come to figure it out — your customers already have.

Here’s a recap of brands that have already taken the plunge, along with major takeaways to get you started:

So go ahead, watch that banana video again. You’re starting to get it, aren’t you?

Interested in learning more on how Koupon can help your brand realize its c-store potential?