Welcome to our new blog series In the Greenlight, where you can get an inside glimpse into the Koupon team! We’ve never been much to brag, but we think our team is pretty incredible and they deserve their time in the spotlight. This week we sat down with Brian Reinhart, our Lead Front End Architect. 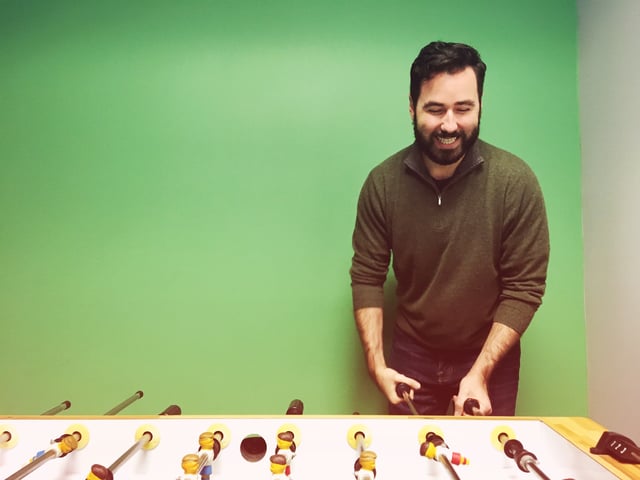 Meet Brian! Not only is he the Lead Front End Architect, he’s also the reigning foosball champ in the office. He's a Texas native, but he traveled to Purdue University to study Computer Science. And speaking of traveling, he’s been to 12 countries!! After graduation he found his way back to the Lone Star state where he began his career as a software engineer.

Front End Architect isn’t necessarily a job title everyone is familiar with - can you explain what your job entails?

My job mostly entails software development. My focus is on the front end, meaning that I develop the code that renders the visible and interactive parts of the application. To put it more simply, myself and the front end team develop the client facing look and feel of the product.

"I fell in love with computer science after I began programming my Ti-83 calculator in middle-school."

What drew you to the world of computer science?

I fell in love with computer science after I began programming my Ti-83 calculator in middle-school. The computer has always fascinated me because there are infinite possibilities for what you can create. It is such a great feeling to see others use, enjoy, and benefit from the programs I have created.

Speaking of programs you’ve created…do you want to tell the story of how you created an app to propose to your wife?

I developed a location-based scavenger hunt app that I disguised as a work app I needed to install on her phone for testing purposes. At the designated time, the app revealed itself and sent her a push notification to kick off the hunt. I had her two best friends standing by to help drive and film the adventure. The app looked like a virtual scrap book, with each page containing clues of the next destination, snippets of interesting/cute text message conversations, images, and facts about our relationship. Reaching the next point of interest would send a new push notification and unlock the next page of clues & images. I also had physical notes and treats waiting for her at each stop. The final stop had a picnic set up, and me hiding in the bushes to surprise her. If the question didn’t give it away, she said yes!

While we know it doesn’t get much better than creating an app to propose, what is most fulfilling about your work at Koupon?

Koupon Media has helped retailers reach new consumers, saved manufacturers money by preventing fraud, and has spearheaded the coupon industry into the digital mobile world. Knowing that I continue to help this company and industry is very fulfilling. Our company also uses cutting edge technology and employs very dedicated and intelligent people which help me keep my skills sharp.

In terms of your role, what does Koupon do differently than other companies?

The Engineering team at Koupon Media is very open to everyone’s ideas. There isn’t one person dictating the technologies we use, the way a feature should be implemented, or even how a user interface should look. I believe this mentality has helped us become the leader in this industry.

You’ve been with Koupon for 3.5 years now – do you have any insights to share on the startup life?

I love the startup life! I believe the reason startups are becoming so popular is because they can be very effective if run properly. There is a little more stress and definitely less room for error, but I believe the small and lean nature of a startup lends itself to much greater productivity and individual contribution. We are constantly designing, creating, and innovating, which is exactly why I got into computer science.

"It may be shocking, but I am a bit of a nerd. I have recently been programming my Amazon Echo to teach Alexa new tricks and skills."

Alright, enough about work. What can you be found doing on the weekends?

It may be shocking, but I am a bit of a nerd. I have recently been programming my Amazon Echo to teach Alexa new tricks and skills. I also enjoy playing video games with my wife, such as League of Legends. When I have a long weekend, I like to travel to places I have never been. I also love trying new and exotic foods!

Next up on In the Greenlight: the one and only Cameron Taggart, Client Development