Here Are 10 Sales Promotion Examples Worth Copying From CPG Brands 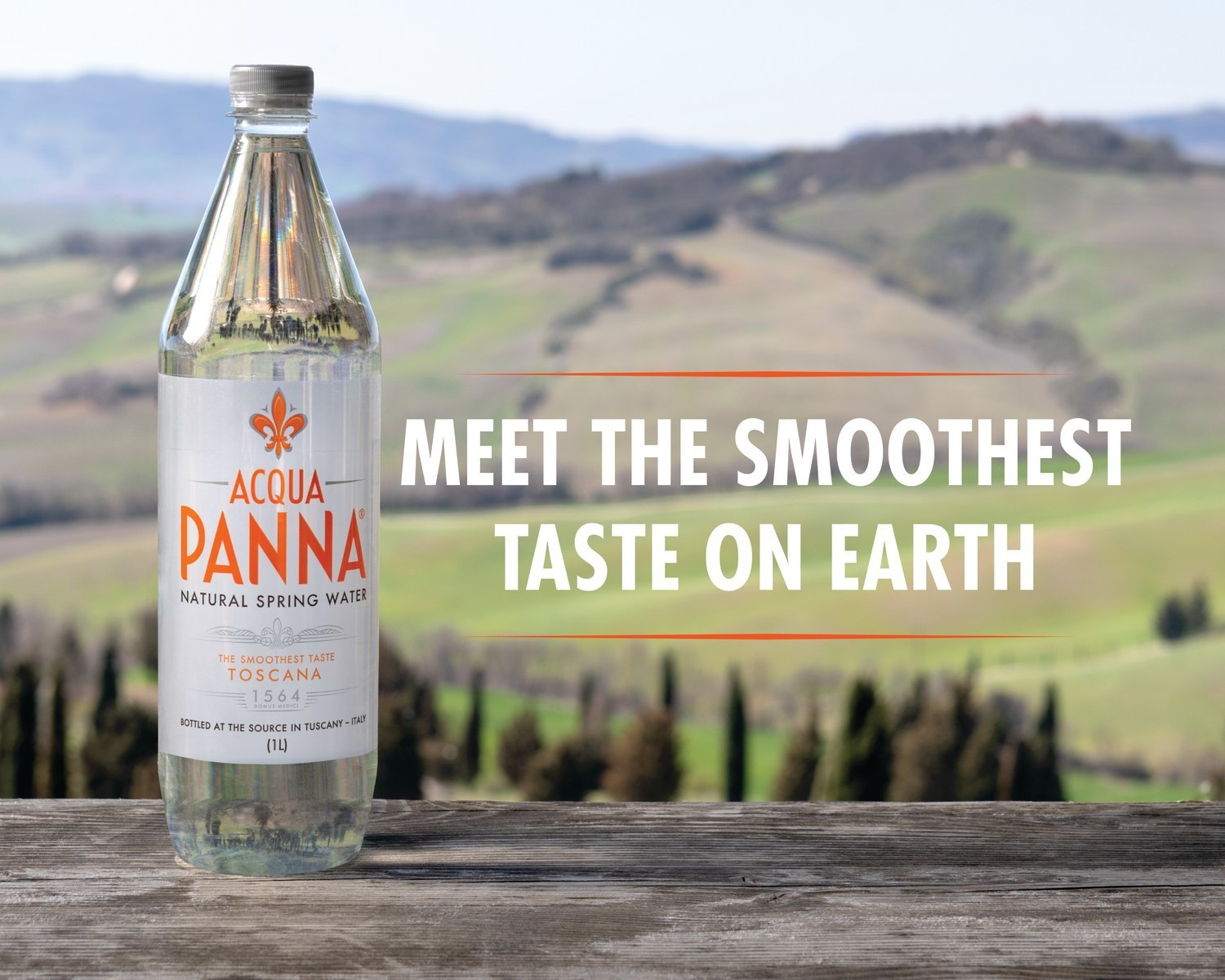 Sales promotions are an age-old trick in any marketer's arsenal. And they're — more often than not — effective for obvious reasons: Consumers want products they buy delivered fast, and they want them for less.

But while your sales promotions usually need to win the attention (and the wallets) of consumers, during COVID, you also need them to deliver exceptional value.

There’s no need to reinvent the wheel though; we’ve gathered inspiring examples and takeaways that you can apply to your next campaign.

So without further ado, here are 10 remarkable sales promotions from CPG brands. 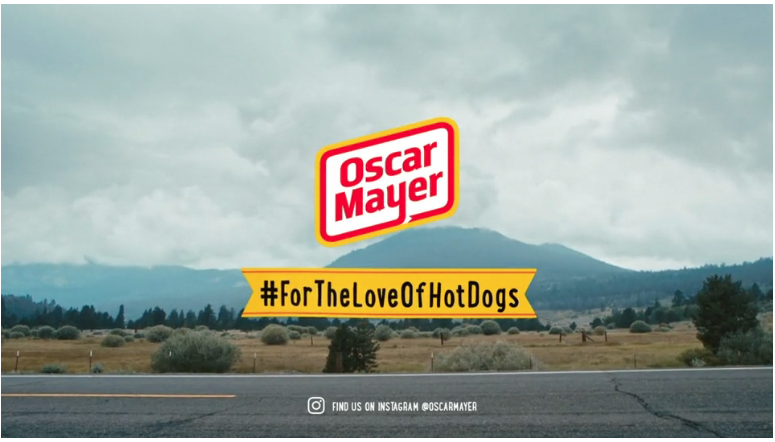 As their head of marketing Greg Guidotti explained, "Consumers loved Oscar Mayer hot dogs, but they were buying them less as they were concerned about some of the ingredients."

So, after considerable research, they changed the recipe to make their product healthier for consumers by removing all added nitrates, nitrites, and artificial preservatives from their hot dogs.

To promote the new and improved recipe, Oscar Mayer launched its spectacular “for the love of hot dogs” campaign. They kicked things off in early summer, just in time for prime hot dog eating season.

The centerpiece of the multichannel campaign was the iconic Wienermobile (Oscar Mayer’s hot dog-shaped vehicle). To show how far they would go to put a better hot dog in people’s hands, Oscar Mayer sent the Weinermobile to unexpected places.

Like on a barge on its way to Governor’s Island in New York... 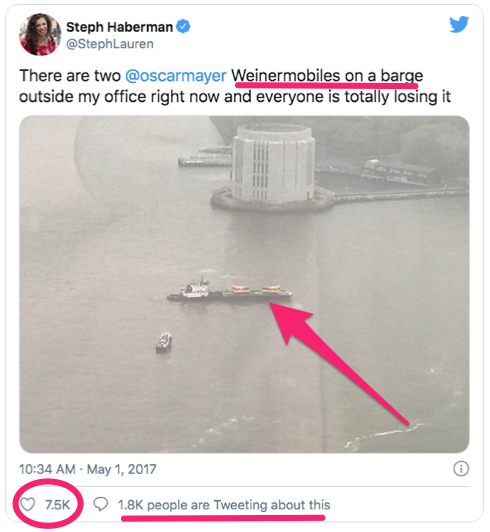 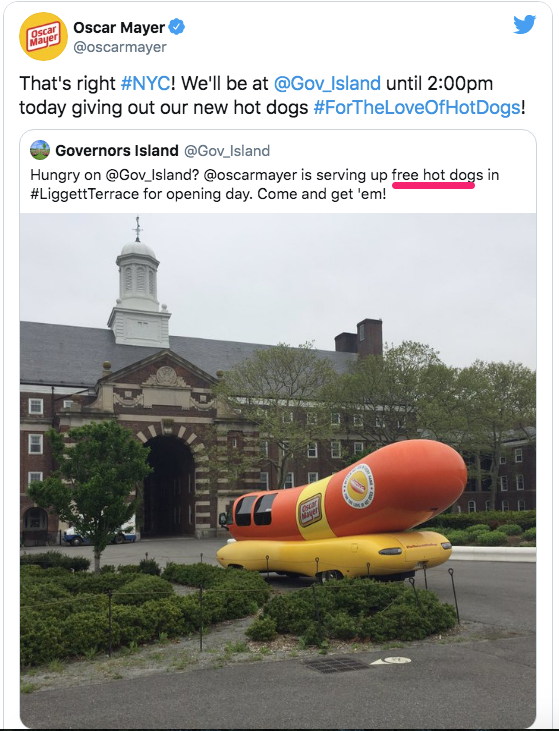 The campaign was wildly popular, garnering coverage in over 1,500 media outlets including Fortune, Forbes, Bon Appetit, Delish, and the Chicago Tribune.

The hashtag #ForTheLoveOfHotDogs was used over 8,800 times, and a video of the Weinermobile in Alaska received over 7 million views.

Plus, Oscar Mayer hot dog sales rose 3.4% in the first month of the campaign alone.

2. Lay’s “Do Us A Flavor” contest sales promotion 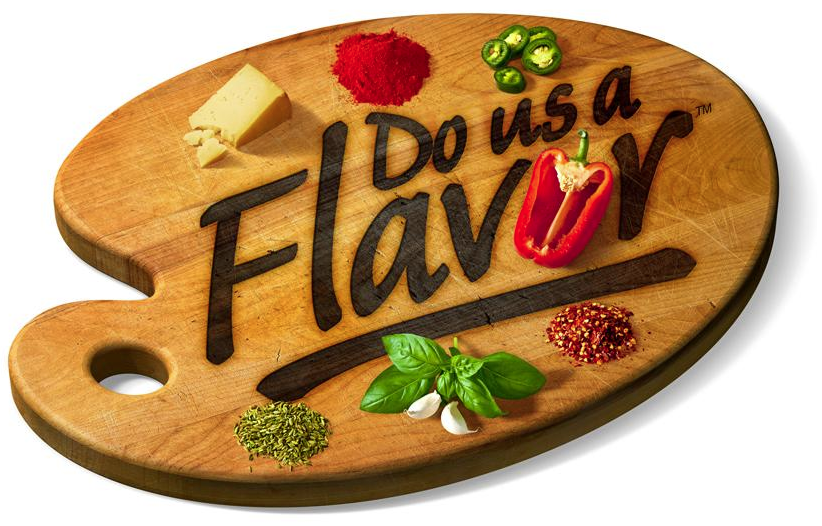 Pepsico’s classic potato chip brand Lay’s was in a rut and struggling to make inroads with millennials. So Lay’s decided to run a contest promotion to build enthusiasm for their product.

They kicked off the campaign with a pop-up tent in Times Square. Then, they launched a Facebook page where people could submit ideas for new flavors. At the end of the contest, Lay's would produce the top three flavors and the public would choose the winner.

And to make things even better, the creator of the winning flavor would win $1 million.

Not surprisingly, the contest generated a lot of excitement. People were submitting flavors in droves. Once submitted, contestants received an image of their own flavored Lay’s bag.

It was social media gold.

People were sharing their Lay’s bags and voting for favorites. Lay’s even partnered with Facebook to change the “Like” button to an “I’d eat that” button.

Celebrity chef Michael Symon and actress Eva Longoria narrowed the submissions to the top three and then Lay’s put them in stores. 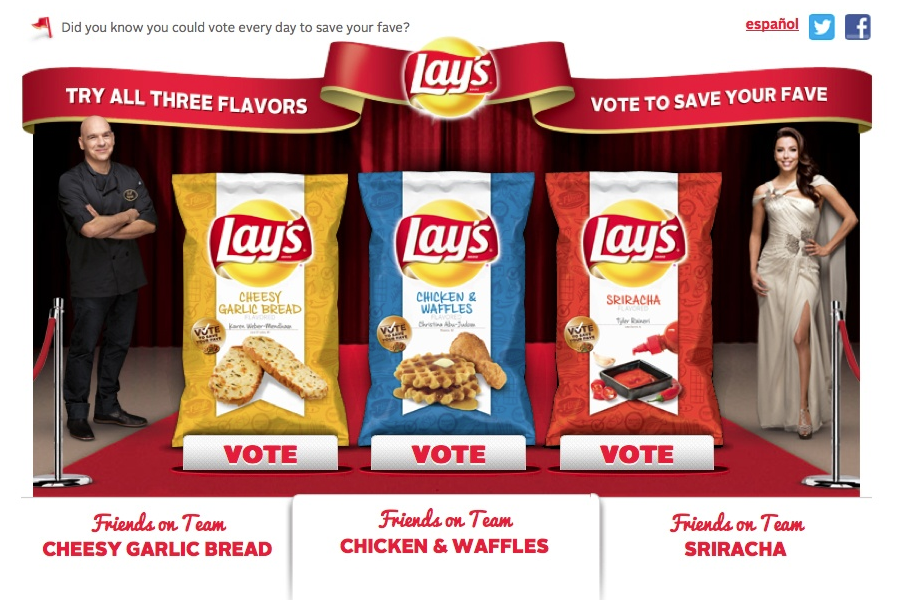 In the first year of the contest, Lay’s received 3.8 million submissions, 22.5 million Facebook page visits, and a 12% increase in sales. 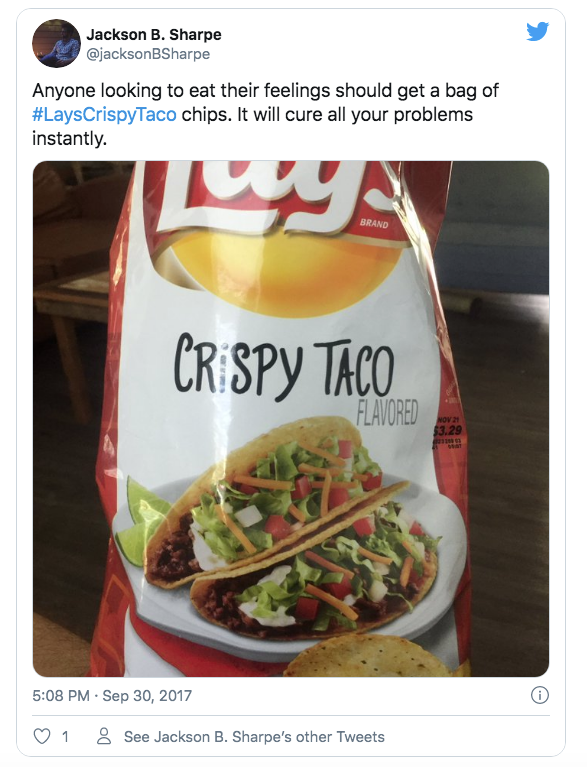 Frito-Lay’s senior director of marketing Sarah Guzman said of the most recent contest, "This year's competition was fueled not only by great flavors but also by the people and stories behind each one of them. We've now introduced a total of 14 flavors to America throughout this iconic contest and, if one thing has remained unchanged, it is that our fans have incredible ideas for the next flavors of Lay's.” 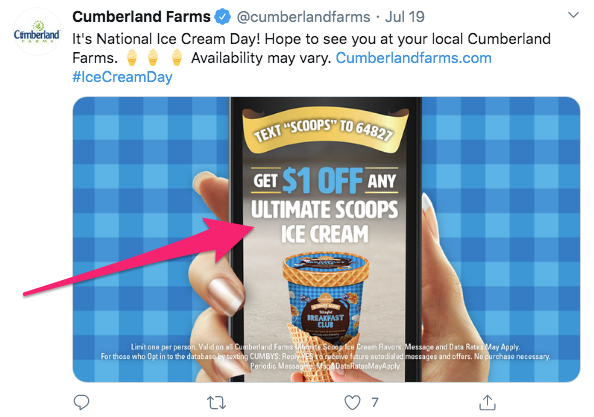 Cumberland Farms is a convenience store with over 600 locations on the East Coast.

Existing customers received the coupon via text message on the morning of July 19th, and new customers could text in to participate. 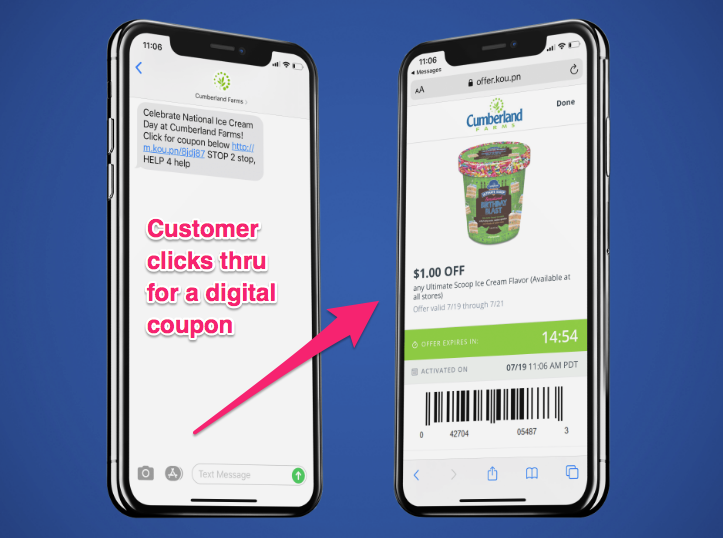 Takeaways for your discount promotion campaign during COVID: 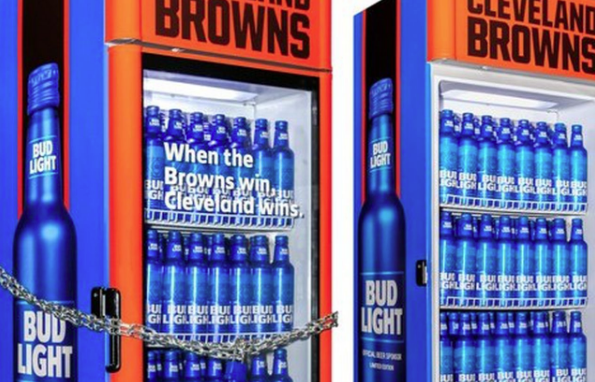 Back in 2018, the poor Cleveland Browns hadn’t won a game in nearly 21 months. The city and its devout fans stood by their loveable losers though, never losing faith.

In a stroke of genius, Bud Light seized the moment and installed “Victory Fridges” across the city. They painted the fridges Cleveland orange and filled them to the brim with cold Bud Light.

The catch? The Victory Fridges were locked with chains and WiFi padlocks to be opened only when the Browns won their first game. And then given out for free to the team’s loyal fans.

“When the Browns win, Cleveland wins.” 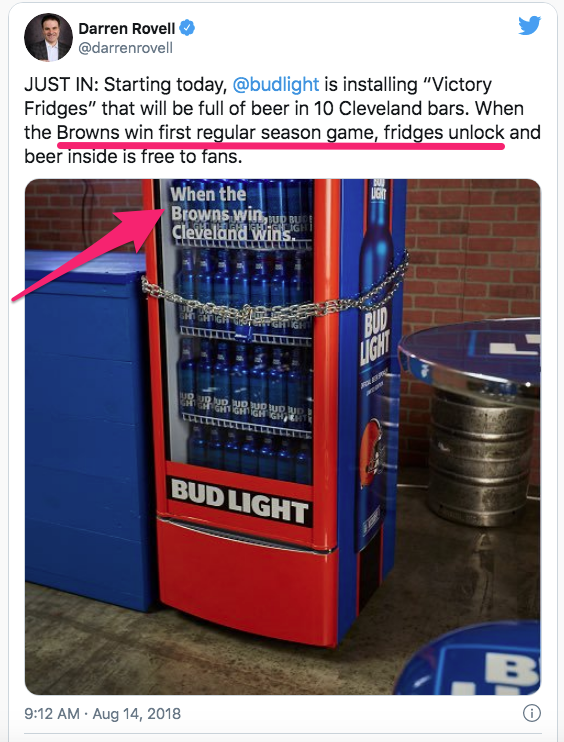 Luckily, it didn’t take the Browns long to deliver. In September, they beat the Jets 21-17, securing their first win in 635 days.

The Victory Fridges were so connected to the win that quarterback Baker Mayfield asked in the post-game interview, “Did they open the Bud Light things?”

Obviously, the campaign was insanely successful.

ESPN’s Darren Rovell said the night of the Browns’ victory alone was worth nearly $7 million in publicity. 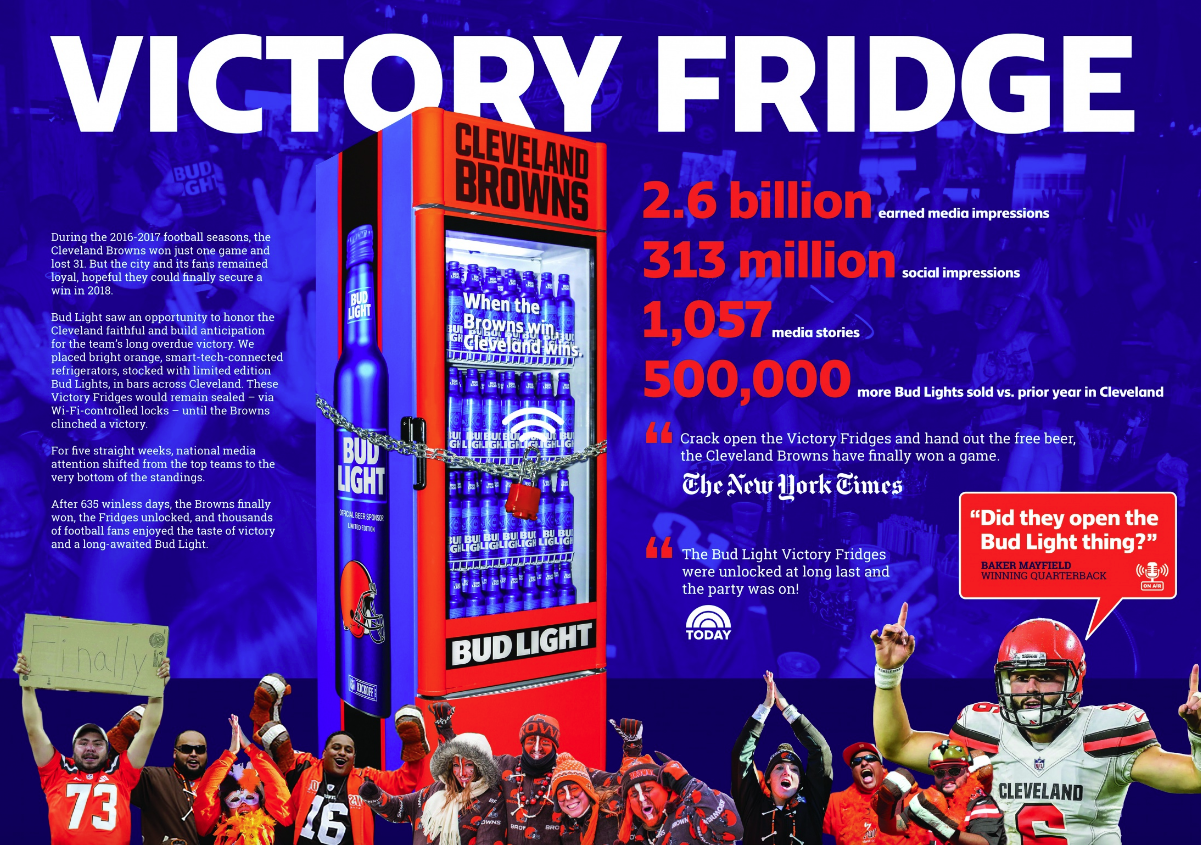 5. Pipcorn’s “Buy One Give One” BOGO sales promotion 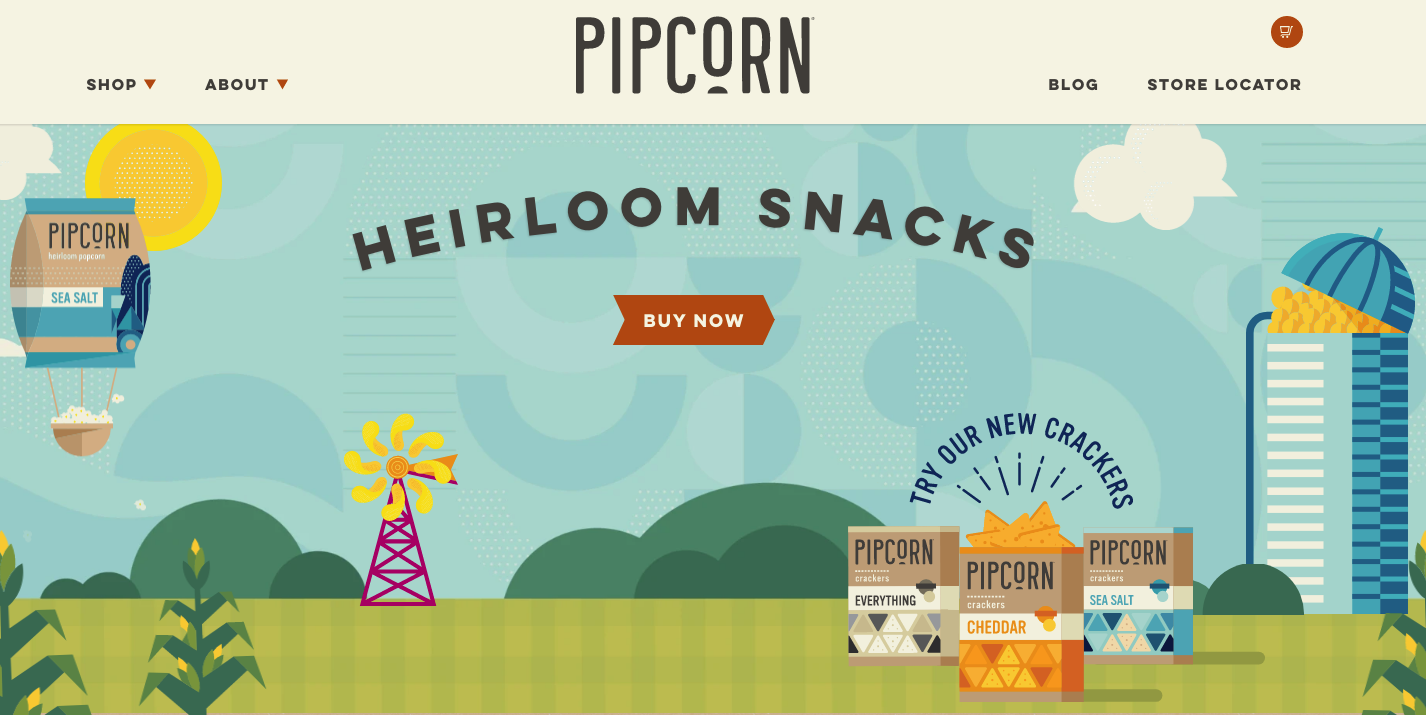 Prior to COVID, the Shark Tank-funded snack company Pipcorn relied on in-store sampling to spread the word about its new snack product.

When stay-at-home orders and social distancing mandates hit the nation, however, Pipcorn had to get creative.

So they launched a “Buy One Give One” campaign where customers could ship a free bag of Pipcorn to a friend with a qualifying order. 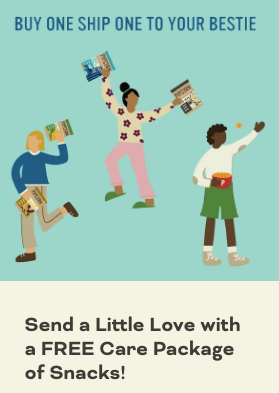 Not only did Pipcorn find a way to replace in-store demos, but they also collected new customer data for future promotions.

Plus, they encouraged upselling because customers had to buy a 4-pack to get the BOGO deal. 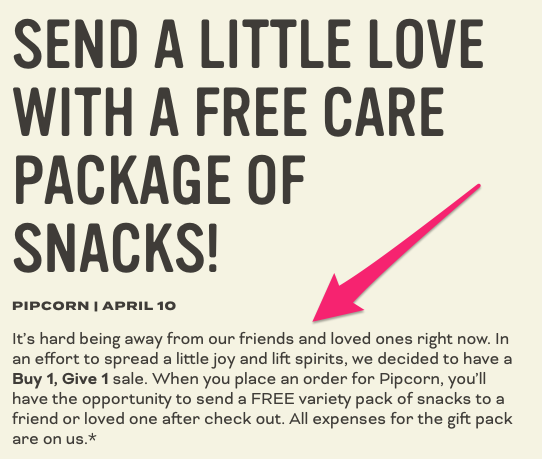 6. Oreo’s “The Stuf Inside” sales promotion 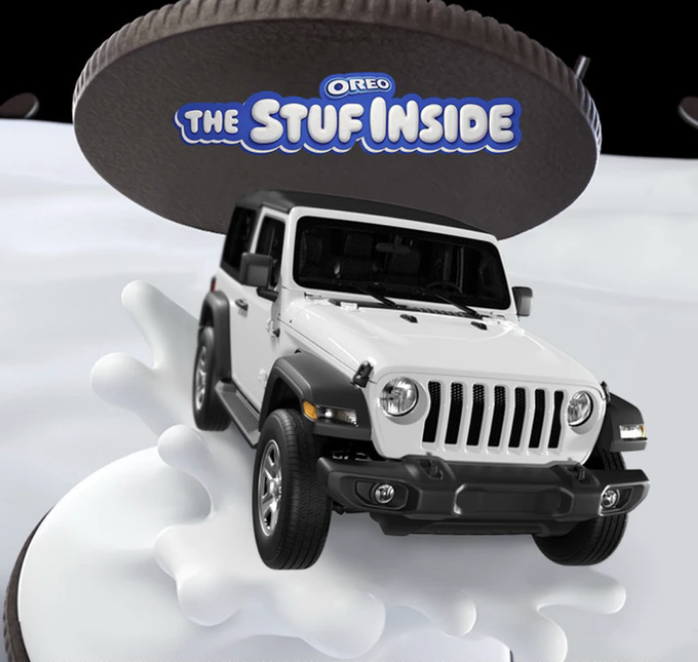 Oreo launched its "The Stuf Inside" promotional campaign to celebrate its 107th birthday in 2019. It was a limited time, 30-day promotion that ran from February 4th through March 6th.

The campaign was multi-faceted, featuring a limited time product, branded giveaways, and a social media engagement.

The limited-time product was a new cookie called “Most Stuf” that had the most creme filling of any Oreo to date. As for the branded giveaways, Oreo created an interactive game to unlock daily treats. After scanning their Oreo, fans could twist open a virtual cookie to reveal a prize.

Oreo partnered with popular brands to create unique giveaways. There was an Oreo-tricked-out Jeep Wrangler, an Oreo K2 Snowboard, and an Oreo Xbox One. Oh and let’s not forget the fan-favorite Oreo iRobot Roomba: 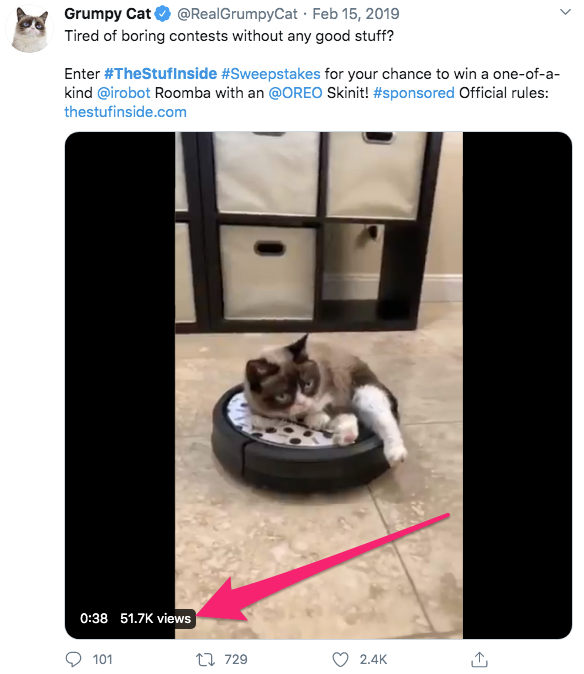 Besides the big stuff, there were also lots of smaller prizes to make everyone feel like a winner. The frequency of the prizes helped boost engagement and people had a lot of fun with this campaign. 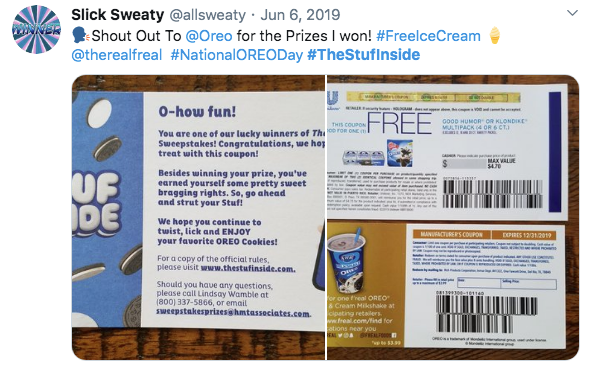 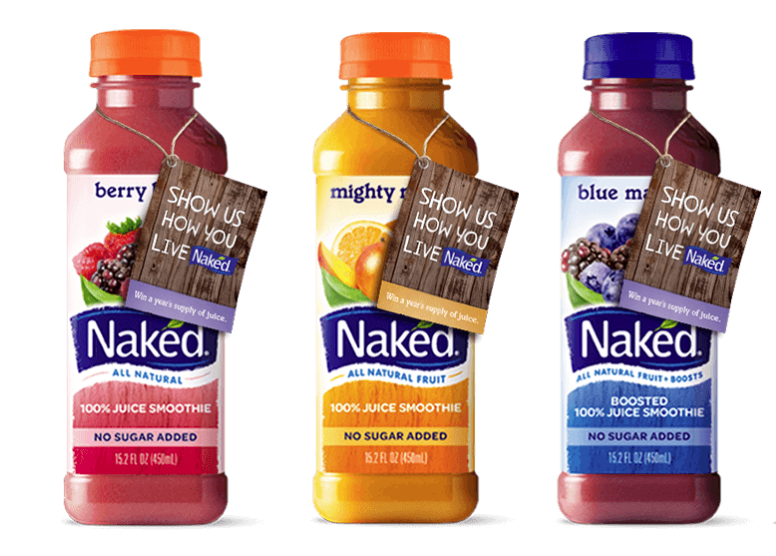 Naked spent years at the top of the premium juice category. But an onslaught of competition threatened to take their crown.

So the juice brand launched a multichannel promotional campaign called "Live Naked." The goals were to defend their position as a category leader, increase market share, and maintain their premium price point.

At the core of Naked's strategy was their loyal customer base, known as the “Bare Believers.” These believers were already apt to promote Naked's product. But Naked thought they could do more.

So they asked them to promote the brand's core values. In exchange, Naked offered incentives like a year of free juice or a feature spot in a national advertisement. 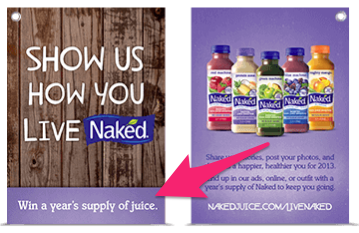 Naked also used social media influencers to piggyback on the exposure generated by the believers. 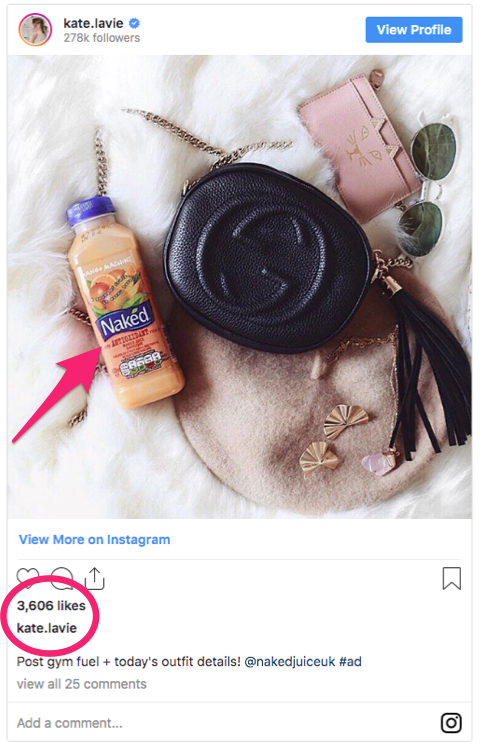 Plus, Naked launched new flavors and sent their juice truck out to events to give out free samples.

At the end of the campaign, Naked’s market share was at 48% and sales had risen 26% year-over-year. 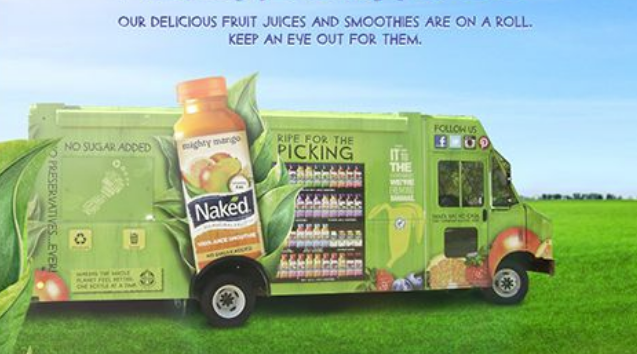 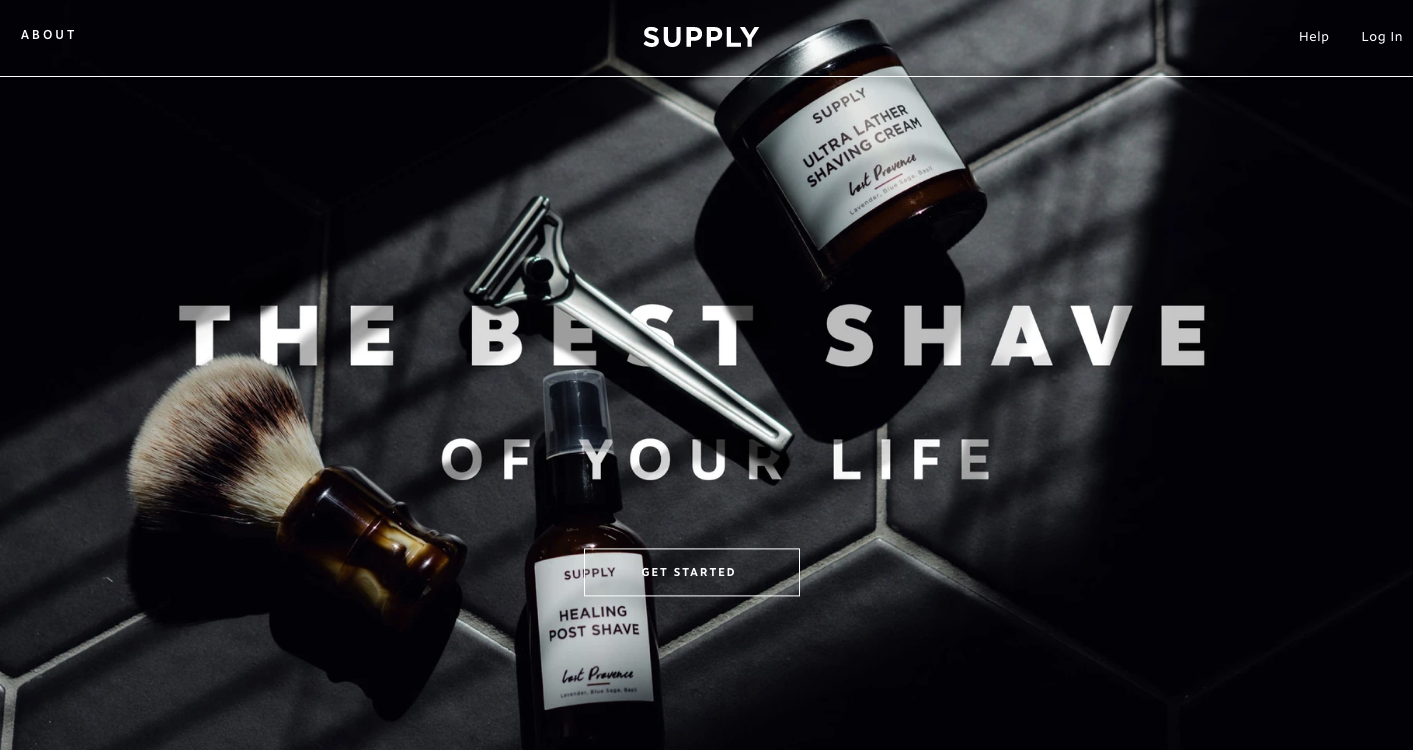 Supply, the high-end razor company, rarely discounted its products before COVID. But when sales plummeted in the spring, they decided to give it a try.

Patrick Coddou, Supply’s founder, said, “I knew the day would come when our price point would be a hard sell in this environment.”

They tried a few different tactics before landing on one that worked. The winner? Buy a razor and get a whole year of blades for free. 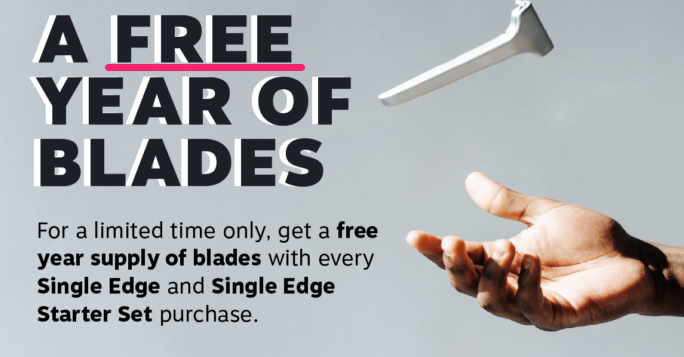 With people stockpiling essentials, the opportunity to get a year’s supply struck a chord. The razor company launched the promotion on a Friday and had their best weekend sales volume since Black Friday.

The Tuscan spring water had dominated the restaurant industry for decades, but it was new to the CPG scene. To build awareness and drive trial, Nestle partnered with Koupon (yep, that’s us). 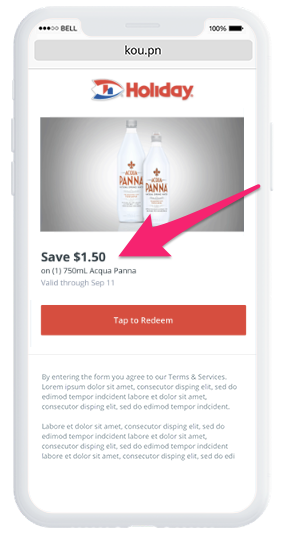 Then we ran a robust digital marketing campaign with targeted ads on Facebook and other sites. These strategies achieved over 1 million impressions, plus those from in-app and in-store signage. As a result, Acqua Panna’s sales increased by 7.3%.

Personal rewards aren’t the only way to a customer’s heart. In fact, for many people, charitable reward programs are more inspiring.

"Over the past 70 years, Coca-Cola has committed itself to supporting the Boys & Girls Clubs of America as one of the most important youth-serving organizations in the world.

"This year, we are proud to launch the 'Make Every Sip Count' campaign with Family Dollar to enable young people in need to achieve great futures as productive, caring, and responsible citizens."

Back in 2018, the goal of “Make Every Sip Count” was to raise $1 million dollars for the Boys & Girls Club. And Family Dollar and Dollar Tree contributed additional funds through customer, vendor, and company donations. 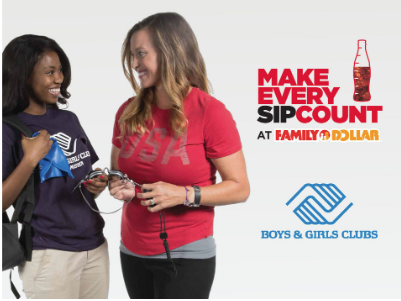 In 2020, Family Dollar and Dollar Tree announced that they would be increasing their annual giving to $2 million dollars, including the “Make Every Sip Count” contribution.

Funds this year are being used to support the Boys and Girls Club’s critical COVID-19 relief strategy of response, recovery and resilience for kids, families and communities.

The Boys & Girls Clubs of Greater St. Louis is one of 27 Clubs to receive a grant through the 'Make Every Sip Count' campaign. The Club is supporting kids in their community with virtual programming and camps, opening during the school day to support virtual school, and continuing to offer a safe place for kids and teens.

To stand out in the minds of consumers, you have to make an impression and offer them something of value.

And there are so many types of sales promotions to use as part of your overall marketing strategy.

We hope these sales promotion examples by CPG brands inspire ideas for your own brand.