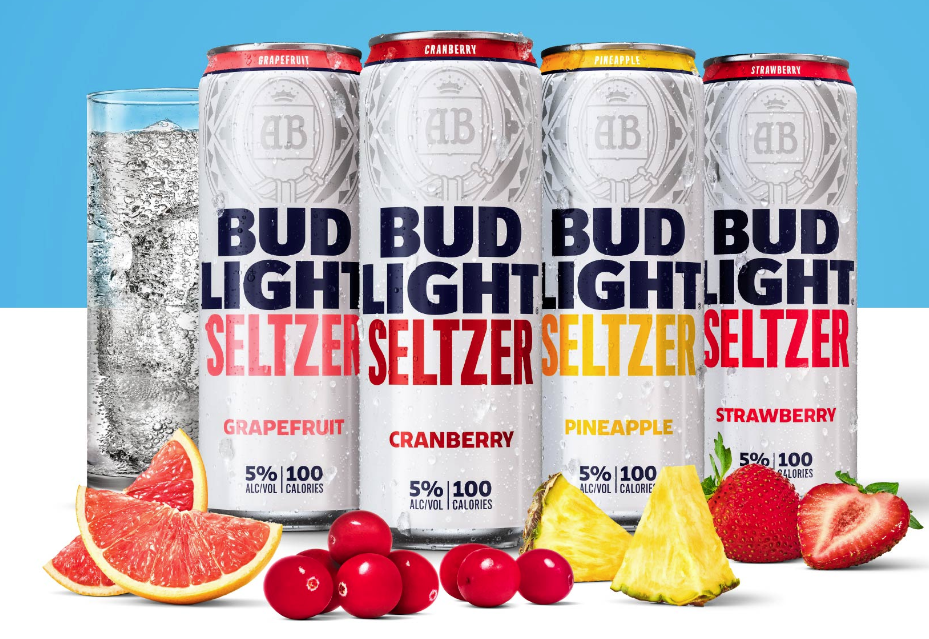 Since White Claw’s explosive summer of 2019, hard seltzer has been on fire.

And not just White Claw’s seltzer — the entire category is up 146%.

As our own data analyst Kevin Doherty highlighted on How Convenient, this categorical growth is one of the most noteworthy aspects of the seltzer boom.
The sheer number of products on the market (or UPC’s), has skyrocketed from 24 to 97. Whether it's Anheuser-Busch or Molson Coors, everyone’s trying their hand at hard seltzer now.

What does this mean for c-stores?

It means the question is no longer whether to carry hard seltzer but which seltzer to carry.

And with warm weather fast approaching, now is the time to make sure you have the right brands on the shelf.

Based on our data, here are the six best-selling hard seltzer brands in c-stores right now. 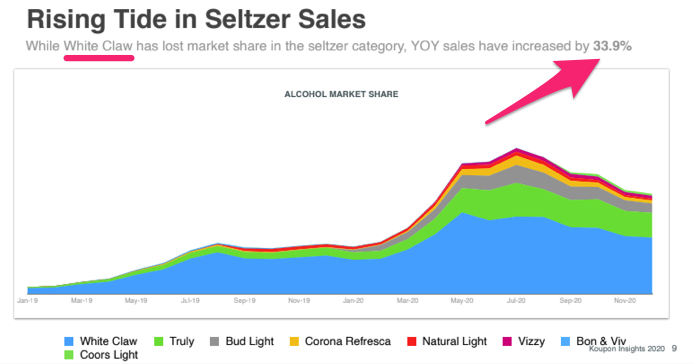 Every once in a blue moon, a brand name becomes synonymous with its product. Many think White Claw has achieved such stature, joining the ranks of Band-Aid and Kleenex.

Some attribute White Claw’s meteoric success to luck, mainly in the form of viral videos and memes (ain’t no laws when you’re drinking Claws). Others attribute it to a superior product, beating the competition on quality alone.

Either way, White Claw has a vice grip on the hard seltzer category. And while their market share is actually down from an astonishing 81% in 2019, sales are up 33.9%.

As Doherty explains, this is due to the expansion of the category as a whole. “Although they don’t have as big a piece of the pie,” he says, “the pie is bigger.”

If you’re going to sell hard seltzer, you’ve got to have White Claw on your shelves. The brand’s top flavors include Black Cherry, Mango and Natural Lime, with each can containing 100 calories and an ABV of 5%.

To maximize sales, Brooke Hodierne, vice president of merchandising at 7-Eleven, recommends merchandising hard seltzers in the refrigerated section and making room for displays and top packs on end-caps.

“Our rule of thumb is to have at least one full shelf of singles and a minimum of two shelves of multipacks in the vault,” she says. “That serves the grab-and-go customer, as well as the volume buyer.”

Truly launched shortly after White Claw, in April 2016. When it first hit the market, Truly was packaged in glass bottles instead of the slim cans now associated with hard seltzer.

This may have given White Claw an early edge since customers clearly preferred the cans. After all, light and fruity seltzers are ideal for summer days at the beach, on the boat or in the backyard — all places where you don’t want to worry about broken glass.

Truly quickly adapted, coming out with its own slim cans and variety packs a few months later. But by that time White Claw had an entire summer under its belt and Truly found itself firmly in second place.

Still, second place in the burgeoning hard seltzer market is a good place to be. Until 2019, White Claw and Truly made up 97% of the entire market. And even after all the new entrants in 2020, they still make up 80%.

But Truly is gaining ground at White Claw’s expense. In the chart above you can see Truly held 16% market share in January 2019 and was up to 25% by December 2020.

C-stores would be remiss to leave Truly out of any hard seltzer lineup. The brand has a loyal customer base and is gradually gaining market share.

When it comes to flavors, there’s a lot of crossover between White Claw and Truly, with both offering their own take on standards like Black Cherry, Mango, Lemon and Lime.

There are also notable differences, though, with Truly offering more varieties like the popular Watermelon-Kiwi and Blueberry Acai. The flavors in their tropical variety pack also stand out against White Claw, as does their line of lemonade-based seltzers.

For decades, the beer market was dominated by a few big brands. Then came the craft beer explosion, with small breweries disrupting the category. With hard seltzer, it’s been the opposite. It all started with an unknown and now the big brands are playing catch up.

It’s the strongest bid yet by parent company Anheuser-Busch who, according to Thrillist, has been “slingshotting new hard seltzers into the world like the residents of a medieval fortress under siege.”

Investing a reported $100 million in 2020, Anheuser-Busch is clearly counting on the Bud Light name to break through. So far, it seems to be working, with Bud Light Seltzer quickly capturing 12% market share.

Bud Light Seltzer is off to a strong start, making it another good choice for c-stores to have on the shelf.

It comes in four flavors, Strawberry, Lemon Lime, Black Cherry and Mango. And like White Claw and Truly, each can has 100 calories and a 5% ABV. 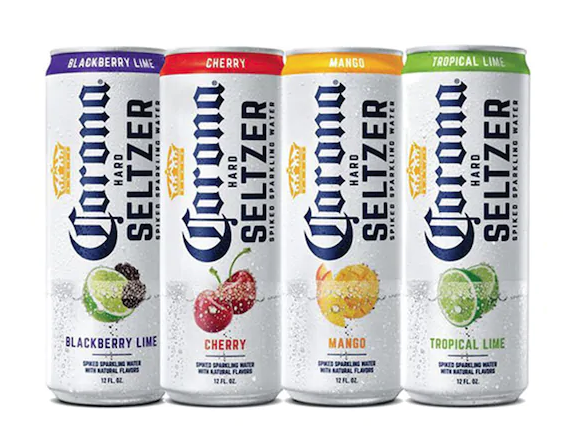 Like Bud Light, Corona launched its seltzer in early 2020 with the hopes of using an established brand name to make inroads with customers. Of course, the name turned out to be less than ideal...

At first, they didn’t help themselves much, drawing criticism for an ad campaign that said new flavors would be “coming ashore” soon. Corona claimed it was in line with their beach-side messaging (valid), but it was viewed by many as insensitive, given the fresh onslaught of coronavirus (also valid).

But they powered through, continuing with a $40 million marketing campaign and nabbing the number four spot in a crowded field.

Corona differentiates itself with a slightly lower ABV at 4.5% and 0 grams of sugar. Flavors include Tropical Lime, Cherry, Blackberry Lime and Mango. 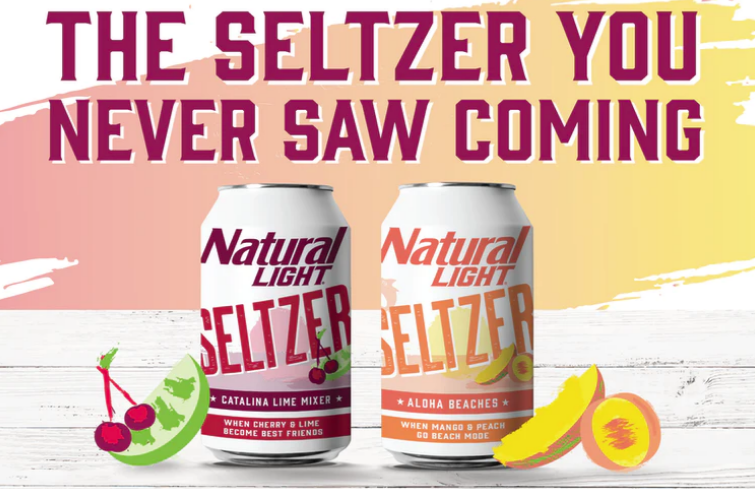 Coming in at number five is Natural Light Seltzer, affectionately known as Natty Light to anyone who went to college (or just a college party, for that matter).

At first, Natty Light and hard seltzer seem like a strange mix, hence the tagline “the seltzer you never saw coming.” But when you think about it, it makes perfect sense. After all, college students are ideal seltzer drinkers.

And at the time, there wasn’t a value brand on the market yet. As Ricardo Marques, the vice president of core and value brands at Anheuser-Busch, told Business Insider, "It's a more affordable option, which is a gap today in the seltzer segment from a product standpoint."

Natty Light is a value brand, coming in 20% cheaper than the competition, with a higher alcohol content (6% ABV). If you’re near a college, it should be on your shelf. The same goes for if you serve a low-income population.

Its flavor choices are limited to just three, simplifying the decision of what to stock: 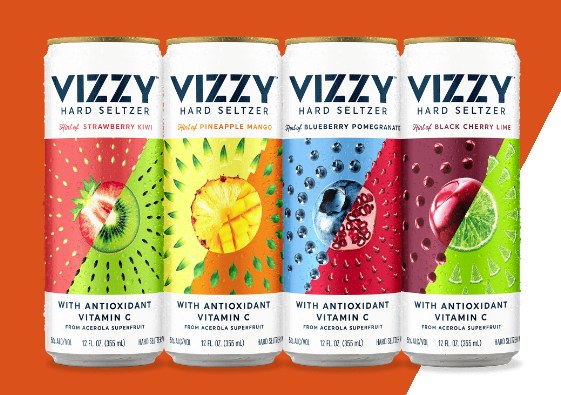 “The hard seltzer category is becoming more crowded with many brands following the same playbook,” said Elizabeth Hitch, Director of Hard Seltzers at Molson Coors. “We created Vizzy to have all of the things the other hard seltzers have but with a meaningful addition that drinkers actually care about, antioxidant vitamin C.”

To achieve this, Vizzy is made with acerola cherry, an antioxidant vitamin C-rich superfruit that contains roughly 30 times more vitamin C per cup than oranges.

Vizzy is designed to appeal to health-conscious, high-end seltzer drinkers. It’s essentially the inverse of Natty Light. And it’s priced to compete directly with White Claw and Truly.

So if your store serves a higher-income population, Vizzy would be a good addition to the shelf. It also makes sense to add Vizzy to the mix if you're already selling good amounts of White Claw and Truly. 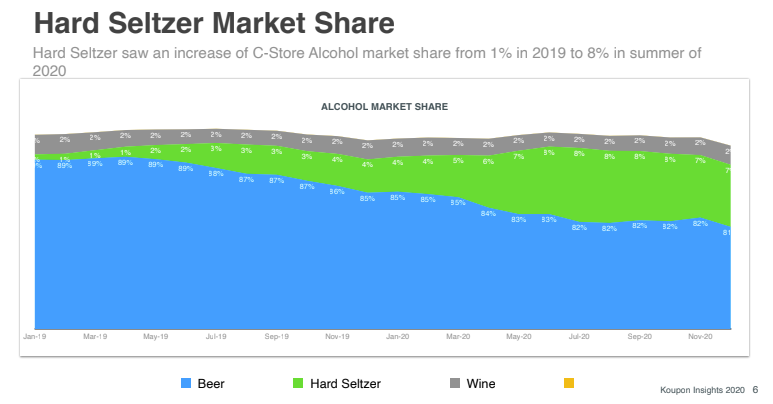 As you can see above, hard seltzer’s share of the alcohol market is growing at a phenomenal rate. And it’s showing no signs of slowing down.

A recent Nielsen report agrees, saying “no matter how you frame it, hard seltzer has the most sustainable growth trajectory across the U.S. alcohol landscape.”

And while it may sound counterintuitive, Anheuser-Busch points out that hard seltzer can actually drive beer sales as well. As their senior director of category development, Sara Hillstrom explains, “in the past year, 43% of new c-store seltzer shoppers were first-time c-store beer shoppers. This means that seltzers are an effective way to bring new shoppers into your stores.”

So which seltzers are your store going to carry this year?

Interested in learning more on how Koupon can grow your c-store and drive shopper engagement?